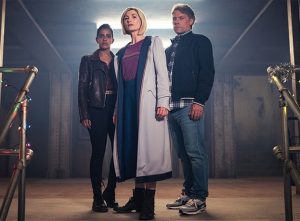 A Rom Com With Daleks

Doctor Who: The Eve Of The Daleks is coming on New Year’s Day and here’s its director Annetta Laufer talking about it…

Can you tell us a bit about how you came on board for this project, and what attracted you to the job?

I got contacted by the producer of our episode Sheena Bucktowonsing who had seen some of my work online – in particular a Sci Fi short film I directed called Afro Punk Girl. She emailed me and asked if I was interested in meeting her and later Chris (Chibnall), and it went from there. The reason I decided to join Doctor Who was because I knew such a genre bending, epic story telling format was going to be a huge and fun challenge for me to embark on. Plus I was going to work with the first female Doctor in the history of Doctor Who! That’s pretty awesome!

What were the biggest challenges filming Eve Of The Daleks?

From a practical point of view – it was time, time, time. We had a lot to shoot in a short space of time while also making sure it looked cinematic and exciting. The locations were also a challenge – especially the narrow corridors. Moving around with cast and crew and equipment, and Daleks and abide by all the strict COVID-19 rules in place, made it very challenging.

But we luckily had a fantastic crew who were fast and extremely efficient so we always managed to get it done. From a story point of view – the challenge was keeping track of which time loop we were in, as we were shooting out of sequence and so some time loops could appear very similar. We also had to keep track of what the ‘story time’ was on the clock as each loop lost one minute.

What was the atmosphere like on set? You had a few comics in this cast – there must have been lots of laughs?

The atmosphere was amazing. We laughed A LOT! But also everyone worked really hard and were incredibly focused. So we actually got so much work done. Everyone was such a joy to work with.

Have you always been a Doctor Who fan, and if so what are some of your own favourite episodes or specials from previous series?

I was never really a big Doctor Who fan when I was a kid. I remember it being on TV but I wasn’t much into Sci Fi at the time. It is only when the reboot started that I took more notice. Some of my favourite specials from previous years include The Runaway Bride, Voyage of the Damned and The Doctor, the Widow and the Wardrobe. I also really enjoyed Resolution and Spyfall Part 1 with our 13th Doctor.

Were you involved in any of the casting?

Chris had suggested Aisling Bea which I thought was a great idea. I knew Adjani from his web series Dreaming Whilst Black so when his name was put name forward I was excited, as was Chris.

Will you be watching it yourself on New Year’s Day? What do you hope audiences take away from this episode?

I will be watching it with my family on New Year’s Day which will be a lot of fun. What I want the audience to take away with them is a feeling of happiness and a warm glow inside. After all the heavy months we have been through, I think everyone deserves a bit of magic and cheer. So what could be better than watching a Rom Com with Dalek!