2015 was a truly great year for TV series

2015 was a truly great year for TV series, especially concerning women’s onscreen representation. Shows like Jessica Jones, The Man in the High Castle and Supergirl, among others, all feature well-written female leads who are both heroines worth of admiration, and down-to-earth, occasionally flawed individuals, whom we can identify with. Yet, even among all this great shows, Fargo’s second season seems to be the unsurpassed winner when it comes to well-written, complex and believable female characters.

While the series’ first season was a favourite among fans and critics, some viewers were quick to point out that although the show’s protagonist Molly Solverson (Allison Tolman) is an independent, brave and admirably professional woman, the rest of the series’ female cast seems to be plagued by the usual stereotypes, characteristic for crime narratives. As journalist Sarah Arboleda points out, most women in Fargo’s first season are defined entirely by their relationship to men. There is antagonist Lester Nygaard (Martin Freeman)’s nagging and cruel wife, followed by his meek and submissive love interest; various vain opportunists who live with rich men they despise; Lester’s sister in law who is not only depicted as a one-dimensional trophy wife but is also so vapid that finds the notion of her husband cheating on her more disturbing than the possibility he might be a murderer. Even the few likable female personages (apart from Molly) are defined by their connection to male characters in the show. A good example of this is Ida, the widow of Molly’s former boss Vern. Ida is likeable because of her tragic victimhood – she is a gentle and caring mother-to-be whose beloved husband is murdered in the eve of their child’s birth. Arguably, she exists only to underline the unfairness of Vern’s unnecessary death at the hand of series villain Lorne Malvo (Billy Bob Thornton). A further example is police officer Gus Grimly (Colin Hanks)’s daughter Greta (Joey King), who is an exceptionally smart pre-teen and, for the most part, merely serves the purpose of exposing Gus’ insecure but also lovable nature to the audience.

Luckily, Fargo’s second season is a clear indicator that the series’ creators have learned from their past mistakes when it comes to writing realistic and multidimensional female characters. From mobster matriarch Floyd Gerhard (Jean Smart) to optimistic and somewhat psychotic Peggy Blomquist (Kirsten Dunst) to brave and practical, albeit terminally ill Betsy Solverson (Cristin Milioti), the women in Fargo’s second season are the epitome of excellently written complex heroines. Even supporting characters like Floyd’s femme fatale niece Simone (Rachel Keller) and confident, no-no-nonsense judge Mundt (Ann Cusack), are depicted as intricate and captivating multidimensional characters who display more complexity than all the female characters of the series’ first season combined.

The time in which season two’s narrative takes place is also significant – the post-Vietnam era was a historical period charged with political tension. In the words of series’ creator Noah Hawley, “It seemed like all the disenfranchised groups, the American Indian movement and the Black Panther Party and second-wave feminism, it just seemed like everyone was going to fight and finally get their seat at the table.” This is evident in the show’s depiction of the late 70s social anxiety, when women began challenging the strict confines imposed on them by the hitherto strictly patriarchal society. For some the new found freedom came with an overwhelming amount of responsibility and unrealistic expectations – women seeking equality were not only expected to be devoted to their careers but to also excel in the domestic sphere which still remained an exclusively female domain. Naturally, the growth of these unrealistic demands leads to tension and disillusionment.

Peggy Blomquist is an excellent example of this – throughout the show she rebels against her husband’s dream of having a simple small-town life. Whereas her spouse Ed (Jesse Plemons) is content with having kids, a stable job and a cozy home, Peggy wants to learn and grow, and is immediately drawn to a course that promises the realization of her full potential. In the show’s final episode she confesses to State Trooper Lou Solverson (Patrick Wilson) that she feels suffocated by the overwhelming expectations, society places on women. She explains that if a woman fails to be a perfect domestic goddess and self-made working lady she is made to feel “faulty”. It is this very pressure that has evidently caused Peggy to spiral down into a life of crime – after all, her first reaction after hitting small-time criminal-turned-killer Rye Gerhard with her car is to badly cover up the accident with Ed’s help and then suggest an escape to sunny California with a maniacal cheerfulness. This is, obviously, the desperate act of a woman who is deeply unhappy with her current life and has been pushed to the very limit of her sanity. One can’t help but wonder if hitting Rye Gerhard was an unconscious attempt to break free from her monotonous, smothering life. Yet, the typically patriarchal Lou fails to understand Peggy’s position and cuts her off with a somber statement that people are dead because of her actions and everything else is insignificant. He proceeds to reaffirm the patriarchal status quo with war stories from his time in Vietnam (because, surely there is nothing more manly than the tales of a man who has seen firsthand military action), ultimately concluding that it is men’s duty and privilege to protect their loved ones. Although by this point the viewers know that Lou is a likable, genuinely good man who means well, his casual dismissal of Peggy’s explanation and his refusal to see her as a tragic victim of her times comes off as rather taciturn and narrow-minded.

Despite her mental instability which steadily grows throughout the series, Peggy never ceases to be a force to be reckoned with. As noted by Kat George, it is Peggy’s anxiety-driven actions that set the narrative of the series’ second season in motion. One of the season’s most striking moments occurs in episode 8 (Loplop) when Peggy stabs the sexist and domineering mobster Dodd Gerhardt (Jeffrey Donovan) and he is reduced to a comically whimpering coward who begs Ed for help with big, teary eyes. Later on, when Peggy and Ed face a mysterious UFO amidst a violent shootout, she matter-of-factly explains to her astounded spouse that “It’s just a flyin’ saucer!” and drags him along. She is most definitely an unpredictable and unruly force of nature who fearlessly presses on, rebelling against society’s expectations and limitations in her own frenzied way. 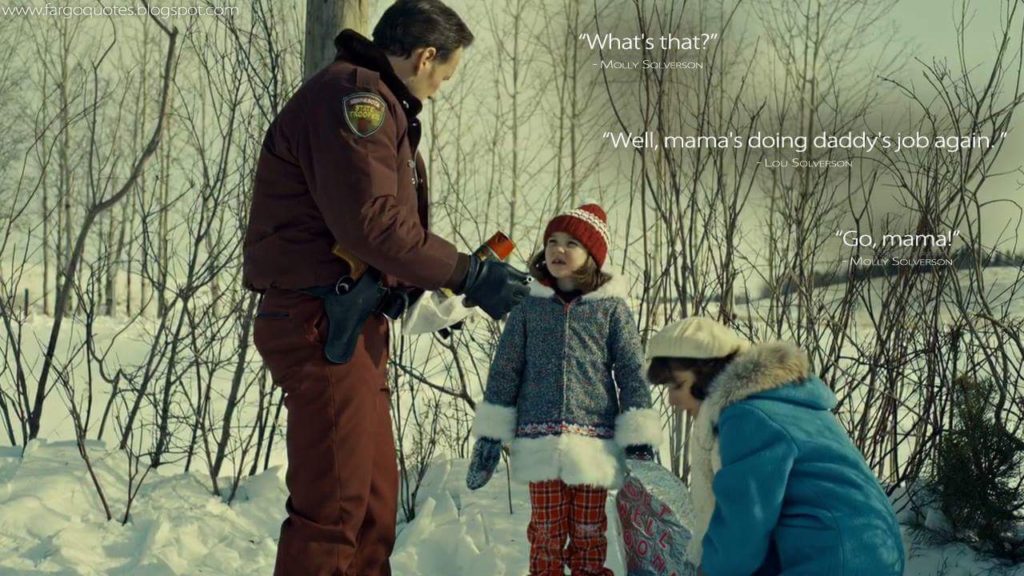 While Peggy has cracked under pressure and lost her balance, Betsy Solverson is her polar opposite. She is a revered wife and mother who manages to look after her family despite suffering from cancer. Although it is plain to see that she is afraid and often in pain, Betsy never loses her cool and rationality. While Lou is the manly hero who has been to war and goes off to save the day, it is plain to see that it is Betsy who is the head of the family. In the beginning of the series she even helps her husband advance in the solving of a case by finding a murder weapon, and later assists her father Sheriff Hank Larsson (Ted Danson) by suggesting that Rye Gerhardt was a victim of a hit and run, which ultimately helps the police identify Peggy and Ed as the culprits. In a sense she does both her husband and her father’s job while is battling a deadly disease and taking care of the household and her daughter. Betsy is universally respected in their small hometown’s close-knit community, and when Lou sends his friend Karl (Nick Offerman) to protect her, it soon turns out that not only does she need no protection but also instructs Karl on how to help Lou move on after her passing. Unlike Peggy, Betsy is firmly grounded and channels her strength into supporting, nurturing and protecting her family. 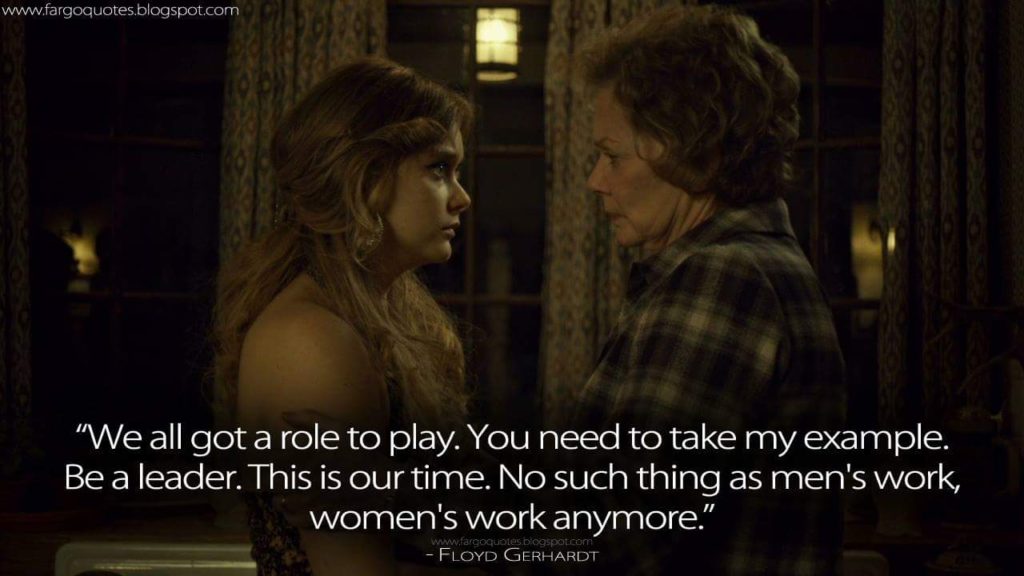 This echoes the sentiments of mob leader Floyd Gerhardt who does everything in her power to defend her loved ones. Following an assault on her husband that leaves him paralyzed, Floyd takes on the role of head of the family with a cold-blooded resolve and does not budge even in the face of the heavily armed enemy. Her misogynist son Dodd challenges her leadership multiple times during the series, believing that he is the next in line to the Gerhardt Empire, yet she succeeds to keep him in check. Dodd represents the anxiousness of the male community of the time, reluctant to allow women the freedom they deserve. This is evident in his verbal and physical violence towards his daughter Simone who attempts to break free from his domineering influence. Simone is as headstrong and resolved as her grandmother Floyd yet, whereas Floyd fights her battles with pure grit and willpower, Simone employs her sexuality in order to combat the male-inflicted violence in her life. Both women represent a threat to the male-dominated status quo and, as a result, both are killed by men who seek to reinforce their authority.

While Fargo’s second season is filled with fascinating individuals of both genders, it’s truly refreshing to see such complex female protagonists and anti-heroes as Betsy Solverson, Floyd Gerhardt and Peggy Blomquist. I very much hope that the series will continue to please viewers with well-written multilayered personalities and perhaps include more POC characters in future seasons – we have seen some improvement in that direction since season one but there is still a long way to go.